DRESS WARM ON 1.22.23! Unfortunately, we are having issues with our heating system at 112 and we are actively working with Studebaker to resolve it. While it will be colder than normal, it'll still be warmer than outside (plus there's coffee!). Kids rooms are unaffected and will have heat.

Send Us a Message 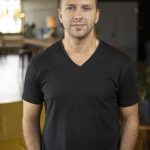 Jason moved to the River Park neighborhood in South Bend in 2005 as he was wrapping up school at Bethel College and he’s been in the city ever since. Before planting SBCC, he worked at another church as a worship leader, college ministry director, and teaching pastor.

The dream of starting a new church plant first broke into his life in 2010, and he spent the next few years trying to discern where that dream might take him. In late 2015, a deep and irresistible call to his own city – South Bend — became clear, and he began the work that he’s been doing ever since.

His formal education took him to Notre Dame, where he earned a master’s degree in theology. An advocate for artists and peacemakers, his work beyond South Bend focuses on cultural headwaters and conflict zones.

When he’s not working, he’s probably searching food blogs to figure out the next great meal he’ll enjoy with friends, or at a show to hear a band you’ve never heard of. 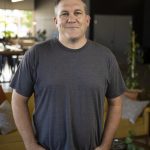 Matt joined the SBCC team as the executive pastor in November 2018, building on past experiences as a community life pastor, a membership pastor and a campus pastor. He brings a lot of heart and passion to our team as a strategic connector and team builder.

Matt has been married to his wife Beth for over two decades, and they have two teenage sons. As a family, they love to adventure outdoors, explore new places, and spend time getting to know the people in their community (especially if it involves music or sports!). Matt is always up for a good book, a hot cup of coffee, a walk in the woods, and unhurried conversation.

Matt is originally from Philadelphia and has spent time living and working on the east coast of Africa, central Pennsylvania (Lancaster) and southern California. He started his professional career as a health and physical education teacher and a high school coach, so he’s a gym teacher-turned-pastor. He has a master’s in educational administration from Temple University and a certificate from the Pastoral Leadership Program (Communitas) at Pepperdine University. 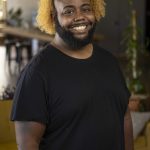 Zachary Gillis, born and raised in Northwest Indiana in the cities of Gary, Hammond, and Merrillville, has been proud to call South Bend home since 2009. After graduating from Bethel University (IN), formerly Bethel College, Zach diligently served in Bethel’s Offices of Student Development and Diversity & Inclusion while garnering his master’s degree from Goshen College. Zach joined the SBCC Team in September 2018 and says that he is so grateful to be at a place where he can live out his passions exactly as who God made him to be.

Aside from singing and anything else related to music, Zach enjoys his morning walks, brown pop, watching reruns of any Black American sitcom from the 80s or 90s, and spending time with his family, friends, and precious Cocker Spaniel, Charmaine. He also loves and frequents the General Deli & Cafe on Jefferson, so if you see him don’t hesitate to say, “Hi!” 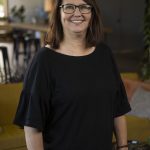 Karen has lived in Indiana pretty much her whole life, calling Michiana home for the last 20 years. She joins the SBCC staff with 14 years of ministry experience. This includes leading children and family ministry, summer camps, and international youth mission trips at Clay Church. Karen also has been a mentor and team leader with Transformation Ministries in South Bend for five years. She has a B.A. in Bible & Ministry from Bethel University.

Karen is married to Tom and they have grown children: a daughter, two sons, and a daughter-in-law. Calling themselves empty nesters, they can travel for more than an overnight, plan date night for any night of the week, and spend evenings on the back porch til well past dark.

Karen is always up for a good cup of coffee! If she’s in her art studio, where she is working on painting a series of portraits, her brush more than likely ends up rinsed in her coffee cup. And yes, she drinks it anyway. 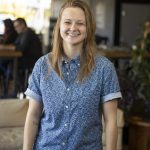 Mariah Keener was born and raised in Lancaster, Penn., and moved to South Bend in the fall of 2021. After spending her early life singing in children’s choirs and learning every instrument she could get her hands on, Mariah decided to go to Lancaster Bible College to major in biblical studies and worship arts. After graduating with a bachelor’s degree in both fields, she served in a variety of roles in church leadership ranging from worship resident to campus worship leader. After feeling a nudge that there may be something more, she took a leap of faith. She left everything she had ever known and moved to South Bend to become a part of the SBCC family and continue growing into the fullness of who she is.

When Mariah isn’t writing or playing music, chances are she’s hanging with her pup Riley, kayaking, taking a hike, producing a podcast (a quarantine passion project), or enjoying a quiet night in. She is more than excited to call “the Bend” her home and always down to make new friends! If you see her out and about, be sure to introduce yourself. 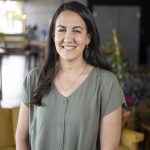 Katie grew up in South Bend and attended Taylor University and IUSB on the way to her master’s degree in accounting. She and her three children have been a part of SBCC in one way or another since it was just an idea, having been a part of early informational meetings and conversations about what SBCC could one day become.

Part of Katie’s love for South Bend stems from getting to see her kids experience some of the exact things she did growing up. She remembers going to the zoo, the same local pools, and even the same library that she is now taking her kids to.

Katie enjoys having meals with small groups of friends and even cooking those meals together. She loves the quality time of the food prep, dining, and shared conversation.

Katie considers herself an old soul as she likes to knit or curl up with a good book, hot coffee and her dog on quiet days.

Italy holds a special place in Katie’s heart as her dad’s mom is 100% Italian and she still has family living in Pisa. She’d love to go back there someday.

What Katie loves most about the SBCC community is that doubt and questions are encouraged, and there is space held for wherever you are on your journey. 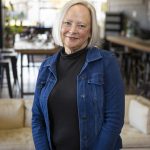 A farmer’s daughter from central Illinois, Lynn comes to the staff with a background in communications strategy and a graduate degree in nonprofit management. She is married to her college sweetheart, John, and is mom to three amazing adult children and grandmother to one darling little boy. She loves travel, family gatherings, and sorting everything from socks to ideas.

Jesus has been part of Lynn’s life since birth, and she loves pursuing what it means to be part of a Jesus-centered community of grace and peace. Believing kindness and empathy are essential to success, Lynn has a career deep in the wells of communications in both private and public sectors. Lending her experience and education to a worthy cause on a volunteer basis was a goal Lynn and her husband set for themselves early on, and she’s grateful to be able to do so for the community at SBCC. Lynn consults with nonprofits in brand identity, project management, and meeting facilitation. She also writes occasionally at lynnmilespeisker.com.